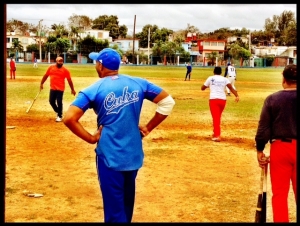 Through the vision and leadership of French teacher Brian Zailian (Tamalpais High), and the ongoing support of the Tamalpais District Board of Trustees, our Global Studies program continues to expand the classroom walls by taking students and staff around the world for cultural and language immersion experiences.  Here is a post written by Social Studies teacher and author Aaron Pribble on his recent experience as a chaperone for the Tam High baseball and softball teams in La Habana, Cuba.  This post is also published at www.baseballamerica.com.

HAVANA, CUBA—Changa Mederos Stadium, rising into an overcast Havana sky like a weathered stack of cobalt saucers, is playing host to a peculiar scene: American teenagers gobbling groundballs, chasing pop flies and choreographing windups with the Yankees of Cuba, the Industriales.

As a trip chaperone, I remain on the sidelines. I see gloves restrung with shoelaces, the ball bucket an empty kitchen sink.

We’re here for a historic series of games. It is the first time an American high school’s baseball and softball teams will play their counterparts in Cuba. Our students hail from a suburb north of San Francisco; theirs a barrio outside Havana.

Two days prior we were invited to practice by coach Lazaro Vargas, who, along with dignitaries from the Cuban Baseball and Softball Federations, gave a presentation launching this unique cross-cultural competition.

Seated in the first floor open-air conference room of the hotel Ambos Mundos, inside whose chalky pink walls Ernest Hemingway once lived and wrote, we learned of Cuba’s national baseball infrastructure and met several of her most famous players, including the Record Man, Enrique Diaz, a former Industriales infielder. Diaz holds more records than any other player, including total stolen bases. When our shortstop challenges him to a sprint inside the hotel, Diaz accepts graciously, and wins.

Traveling on a people-to-people license, we’ve arrived at a singular time in Cuban history. After transitioning from reliance on sugarcane to tourism, the economy is now liberalizing in vertiginous spurts, improving the quality of life for some while also creating fissures of inequality. In addition to the ubiquitous red ration books for each family, there are now two currencies: the domestic peso and the convertible peso, the CUC or “kook”, used in theory for all things foreign. In many ways the peso and kook represent a Cuban paradox, dual realities existing side-by-side, together yet largely separate.

Our adventure lies at the intersection of these worlds: beisbol, beloved by rich and poor, tour guide and guajiro alike. It begins in earnest two days before our Industriales reverie on a ball field in the Regla neighborhood south of Old Havana. A flaming oil tower pierces threatening clouds in the right field distance, a horse is lying in foul territory behind first base, and fans are converging from every direction.

Kenny, our starter in the first game, is nervous. We’ve been told repeatedly to fear potential domination; these guys are supposed to be good. But he strikes out the first hitter. And then another. Then one more. Six innings and seven runs later we’ve won the game.

“Mr. Pribble,” two softball players quip, “You should write a sequel to Pitching in the Promised Land—call it Catching Cholera.”

Game two takes place in Cotorro, the country’s largest steel-making region, 20 minutes southeast of Habana Vieja by bus. The crowd is smaller than Regla but more fervent. Fanaticos suck rum from white juice box-like containers, flailing arms in twisted excitement while playfully ribbing Cuban and American players alike. “Obama-Obama-Obama . . . hey!” We’re sleepy or stunned or can’t hit the hook, but fortunately in the final inning our bats awake to eke out another victory, 5-2.

The last baseball game takes place in Guanabacoa, a poor, hilly municipality east of the Old City. Upon arrival we encounter butchers selling unrefrigerated beef from the back of a truck. Locals armed with domestic pesos wait patiently for lukewarm meat.

Then, disaster. During pregame warm-ups our head coach is struck by an errant throw and knocked unconscious. Eyes to the sky, he spasms uncontrollably. A man rushes from the stands to help. His son is the third baseman, he says, and he is a neurosurgeon. After several tense moments, Coach wakes up. He has a headache and a butt-bruise from the baseball in his back pocket. The neurosurgeon delivers him to a local hospital, where a CT scan reveals no internal bleeding. Coach is released in time to witness his boys lose the only game of the trip, 8-5. At least he will not miss our flight. And socialist health care is free.

Later in our hotel lobby we encounter Enrique Diaz, our old friend, seated calmly with a duffel bag and a warm smile. He has come to say goodbye, and to sell autographed jerseys, bats and cards. Diaz is famous but like most Cuban athletes definitely not rich. Even the Record Man, it seems, needs some extra dough.

In the same lobby we hold a farewell ceremony. Cuban baseball and softball dignitaries accept bags of equipment donated from our community. Clearly, people here are in need of baseball supplies. On the streets and in the stands we’ve been hounded incessantly for gear, but we’ve saved the lion’s share for the federation to distribute.

Early the next morning we board a chartered flight from Havana to Miami, and I’m struck once more by the power of sports. People will talk about Cuba more fully embracing capitalism and democracy. Some will advocate lifting the 53-year embargo (our biggest trading partner, after all, is communist China). They may be right. As a local film director remarked to us earlier in the trip, “Cuba should open up to the world . . . and the U.S. should stop thinking it’s the center of it.”

But more than anything, Americans and Cubans must get to know each other. We share an ocean and a national pastime. We’re neighbors, a puddle-jump away, and it’s much too difficult for both peoples to visit. Let’s understand each other by doing something together. Let’s play baseball.

Back home, though I’m awash in memories, one visits with particular regularity. At the hotel Ambos Mundos during our initial welcome, our global studies director rises to address the panel of Cuban dignitaries.

“It was my dream to bring our teams to Havana,” he says emotionally. “But I have another dream—to bring Cuban players to California, to play against us in our town.”

The head of Cuban softball stands to reply. “Invitation accepted.”

Then he adds, “When one dreams it is a dream. When we all do, it becomes a reality.”

Aaron Pribble teaches social studies at Tamalpais High in Mill Valley, Calif. He is the author of “Pitching in the Promised Land: A Story of the First and Only Season in the Israel Baseball League.”

Language learning on the Global Campus

: the readiness is all

If everyone is thinking alike, then somebody isn't thinking.

Learning to communicate with the world

My generation of polyglots

Language learning on the Global Campus